Leadership is all about service , Mayor Bobby Hopewell  has spent his entire adult  career  in the service of others.  Prior to his   current  position ,  he  served with so many organizations  like the Borgess Health Park ,Bronson Healthcare Group just to mention a few.

First elected  as the Mayor of Kalamazoo in 2007 , he is presently in his fifth term  which expires 2017. He has been elected five times .

He  received Wazobia Global crew in his office and also used the opportunity to share his views on different issues . 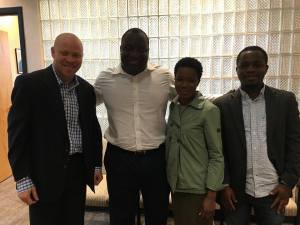