Mukwege, a joint winner of the Nobel peace prize in 2018 alongside Nadia Murad for their efforts to end the use of sexual violence as a weapon of war and armed conflict – is a gynecologist whose career has spanned more than 20 years.

During his career, he has spoken against several crimes going on in his homeland of Congo.

Denis, who is also a pentecostal pastor, founded and works in Panzi Hospital in Bukavu, where he specializes in the treatment of women who have been raped by armed rebels.

Mukwege survived a major assassination attempt in October 2012 when armed men entered his home, fired shots and killed his bodyguard.

The assassination attempt came several weeks after a speech at the United Nations where he denounced the Democratic Republic of the Congo’s 16-year-long conflict and called for justice for the crimes and killings.

Mukwege, on social media and UN meetings, has often asked for the implementation of recommendations of a 2010 UN investigation which described more than 600 alleged violent incidents occurring in Congo between 1993 and 2003. He has also been vocal against Rwanda’s alleged involvement in the Congo crisis.

Now, the UN wary of another attemot on his life, has put him and his family under 24 hours protection by UN military.

The UN said the recent threats against Dr. Mukwege via social media and in direct phone calls to him and his family “followed his condemnation of the continued killing of civilians in eastern DRC and his renewed calls for accountability for human rights violations and abuses.”

In a tweet on Thursday September 10, Mukwege said: “We welcome the redeployment of elements from #MONUSCO to #Panzi this morning to ensure the safety of our patients and staff,”
“Thank you to the #UN for ensuring our protection.” 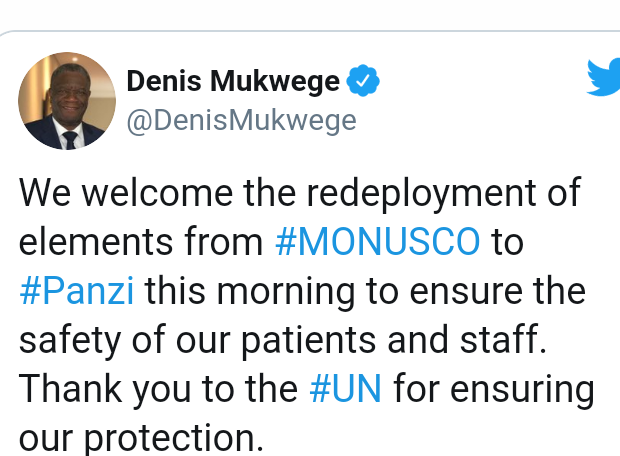